Is your household peace regularly shattered by kitty battles, scraps, and spats?

Sometimes our furry darlings just don’t see nose to nose! And while it’s normal for your pets to have the occasional disagreement, it’s important to seek help if your kitties are regularly arguing to stop problems from escalating.

Luckily, there are lots of ways to encourage our pets to be friends rather than foes, or at least be civil kitties - keep in mind that cats can sometimes be solitary and may never want to be sociable with other furry friends!

7 Ways to Stop Your Cats from Fighting

The best way to stop your cats from fighting, is to identify the cause! If you’re not sure why your pets are in disagreement, the first thing to do is observe them and look for triggers of unwanted behavior throughout the day:

- Do your cats argue most at mealtimes, or near food and water resources?

- Are they in conflict around playtimes? Do they fight for your attention?

- Are kitty scraps due to a lack of individual space or hiding places?

Once you identify the causes of kitty fighting, you can start to limit conflict. However, if you’re still not sure why your cats are fighting, start to think about common triggers such as territory, resources, over excitement - and illness if they seem to be acting out of character.

Disagreements over space and territory are very common with our kitties! If there aren’t enough hiding, climbing, sleeping and perching spaces for each of your individual cats, you may see conflict over territory.

Make sure your pets have enough individual space that they can escape to; sharing space too closely with other kitties can cause stress, particularly if they want to avoid conflicts. 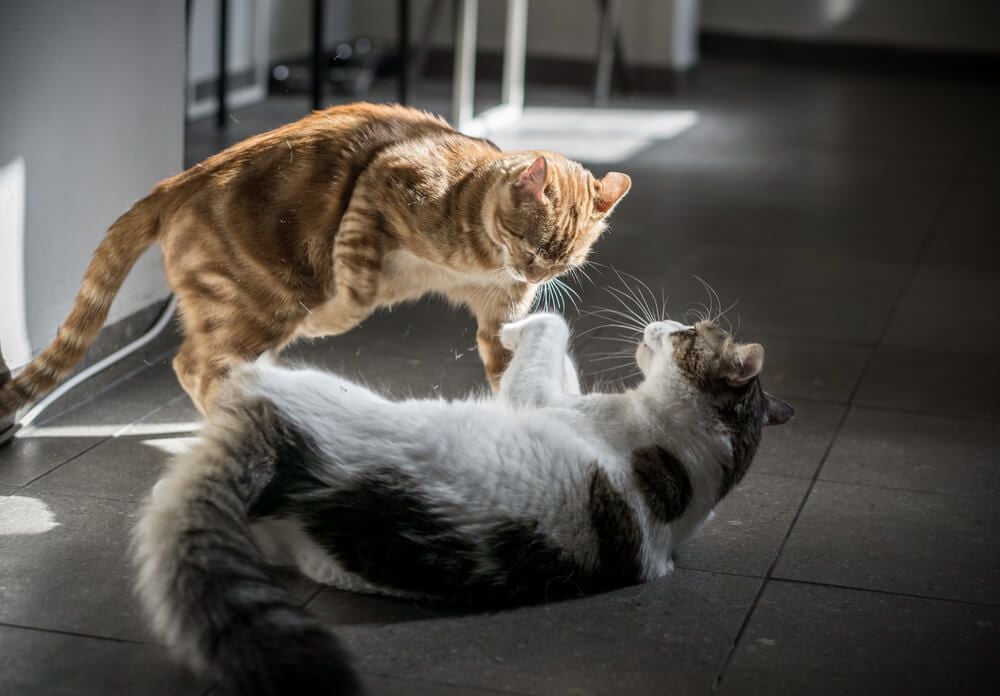 Just like territory conflicts, a lack of individual resources such as food and water bowls, scratching posts and litter boxes can cause disagreement.

Aim to have one of each resource (plus one extra) for each kitty in the house, and check that each is easily accessible.

4. Be Careful with Rewards and Attention

We all love to treat our cats. Try to give attention or treats to your cats when they are calm. You can always try to redirect aggressive behavior before it escalates with a distraction, such as throwing a treat in a different direction or a favorite toy.

If food isn’t the cause of conflict, mealtimes can be a good time for your cats to adjust to each other’s presence in a positive way. Be sure to reward your kitties for staying calm and being non-aggressive when close together!

Daily one-to-one play with your pets can also limit aggressive competition for your attention - and help your cats to burn off any extra energy!

Sometimes bad habits are hard to break! For pets who have been fighting for a long time, it can be tough to change behaviors.

In this situation it often helps to go back to basics; imagine you have just introduced your pets for the first time. Often one cat will tend to initiate conflict situations. So, start by moving the initiator cat to a ‘safe space’ in the house, limiting them to this room, and follow steps to gradually and calmly introduce your cats to each other as though they were strangers.

It is wise to separate your pets if they are causing injury to each other, particularly if one or both cats are becoming ill due to stress, or if you start to see hiding and avoidance behavior.

Then, re-introduce your pets through controlled meetings; visual-only introductions, placing barriers in place to prevent kitty aggression, and treats and encouragement for calm behavior can help them learn to get along. 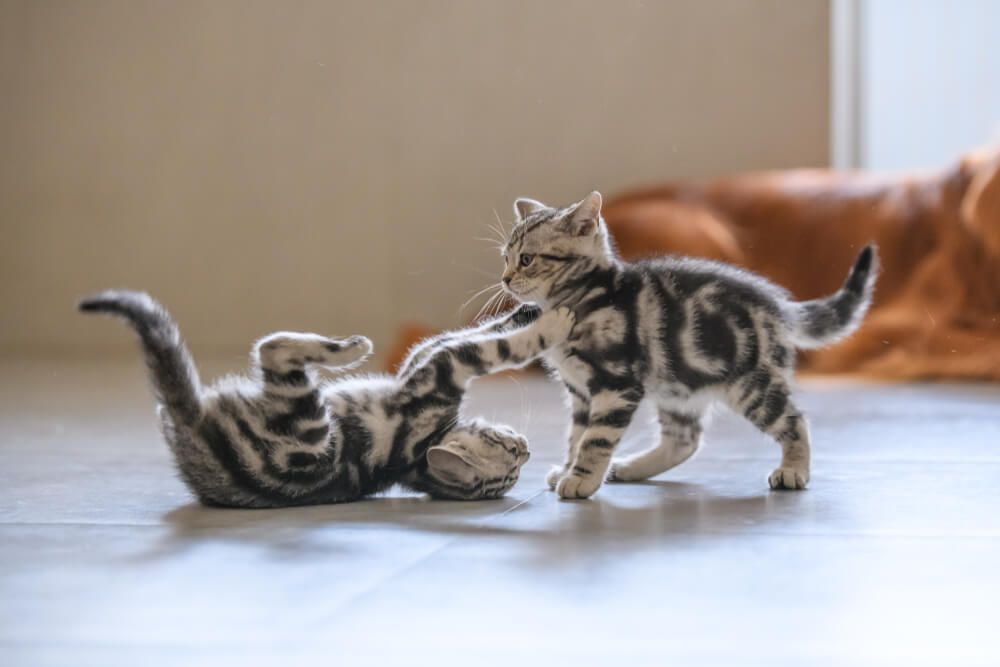 6. Check with the vet

Nobody knows your cats as well as you! So, if your normally calm and peaceful pets have started to fight, it’s wise to check with your vet that nothing is wrong - sometimes aggressive behavior can be a sign that a kitty isn’t feeling well!

Creating a harmonious environment in your home should encourage your pets to act kindly towards each other! FELIWAY Optimum Diffuser can help to reduce conflict between pets living together, and limit signs such as blocking, staring and chasing. Clinically proven, and veterinary recommended to help cats get along better at home, FELIWAY Optimum can keep your cats in constant harmony.

Lastly, whatever solutions you choose, be sure to give your kitties time! It may take a while for your pets to respond and change their catty attitudes!