Dogs and cats have been domesticated and living alongside humans for thousands of years. The domestication of dogs certainly started long before that of cats, and there are also fundamental differences in the nature, biology and behavior of dogs and cats, all of which influence the bond and relationship between human caregivers and their pets.

Broadly speaking, dogs are descended from pack animals (wolves) and develop complex social interactions and relations with other dogs and with humans. As such, pet dogs are often considered loyal, faithful and attentive to their owners.

Cats on the other hand are descended from a largely solitary-living species (North African wildcats), and although they have been domesticated for more than 10,000 years, it is a common perception that cats remain aloof and often fiercely independent animals with relatively little reliance or dependence on humans.

But is that really the case, or just a misconception? Are cats as independent as we think?

Recent studies have begun to challenge some of our common perceptions regarding cats, and the strength and complexity of their relationship with humans. For some cat owners, the results of some of these studies probably come as no surprise, but it is interesting that many of the traditional views of cats and of how they perceive and interact with humans may be based on false assumptions.

Kristyn Vitale and colleagues at the Oregon State University in the USA1 undertook some studies to try to critically evaluate the quality of attachment between cats and their owners. For these investigations they used a ‘Secure Base Test’ – this is a type of test that has commonly been used to look at the attachment between human infants and parents, in other animals (such as primates), and also between dogs and humans. The concept comes from the idea that, ideally when we are young, our parents or adult guardians should be a ‘safe base’ or safe haven from which we can explore our environment and world with confidence and security, with the reassurance of knowing they are around.

During the Secure Base Test, owners entered an unfamiliar room with their adult cat or kitten. They sat on the floor and there were three cat toys placed more than a meter away from them in the room – they could interact with the cat if he or she came within one meter of the owner, but otherwise the owner would remain passive. The type of attachment the kitten or cat displayed towards the owner was classified according to existing human and dog studies: 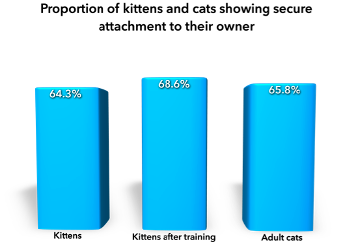 What were the results of the study?

Interestingly, these proportions did not change significantly even with 6 weeks of additional training and socialization for some of the kittens (see the graph above). Additionally, when 38 adult cats were assessed with the same test, very similar results were obtained with almost 66% displaying secure attachment. What does this tell us?

Although the methods used, and the descriptions of the type of attachment styles may not be familiar to many of us, the authors of this study concluded that typical indicators of attachment relationships between cats and their owners were displayed including seeking contact, distress on separation, and reunion behaviors.

These behavior traits have been shown to occur in other animals and humans, and interestingly in the cats and kittens included in this study, the majority (around 2/3 of the total, very similar to what has been described in dogs), showed evidence of secure attachment to their owners, and this attachment appears to be stable from kittenhood through to adults.

The full details of this study can be found here, and while no single study can possibly attempt to fully explore the complexity of the relationships that develop between cats and their owners, it is fascinating to see and understand that cats do indeed appear to form strong attachment bonds with their owners.

The stability of these bonds from an early age also suggest that this may, at least in part, be governed by underlying genetic traits that affect behavior. While cats may often be perceived or described as being aloof and independent, the truth is, in fact, much more complex. Most actually appear to have close attachments to their owners who they turn to as a source of safety and security, just the same as dogs do!