Many cats live in a multi-cat household, and naturally, owners hope for their cats to get along together happily, particularly when they are younger.

But the dynamics of a multi-cat household can be complicated. Cats can have different relationships with each other in the house, depending on their individual personalities and behaviors.

Playing together is considered one sign of a positive relationship, but the behaviors displayed when playing can be difficult to interpret as friendly as they can be  very similar to those seen when cats fight and it can be difficult to tell the difference. 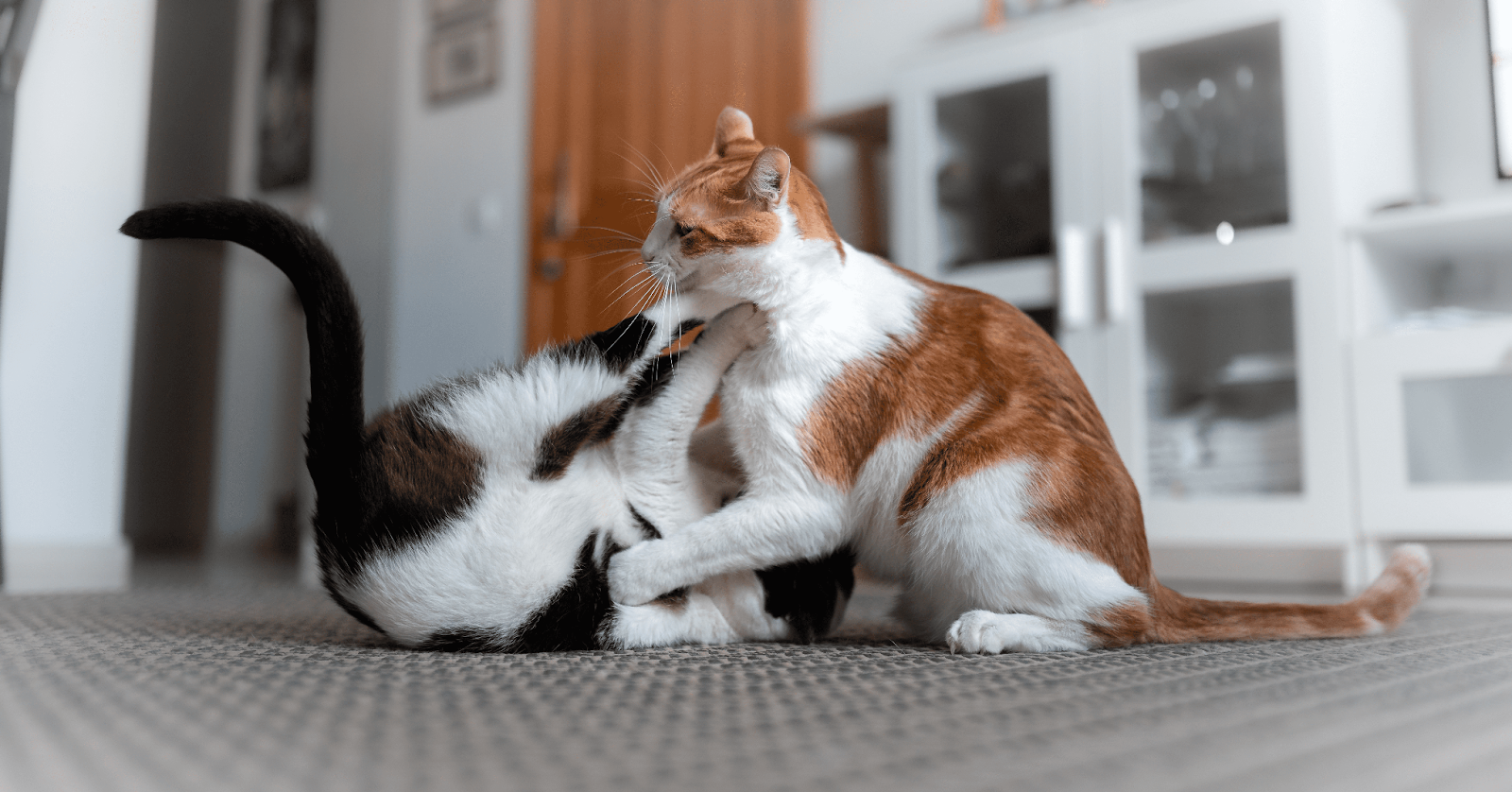 These behaviors include staring, pouncing and chasing, as well as grabbing, wrestling and bunny kicking with their back paws. It can certainly look painful! Although the behaviors can be when fighting or playing, there are subtle differences:

There are also specific play behaviors that are not usually associated with aggressive or negative interactions. These are often seen with young kittens and include rearing up on hind legs, and side stepping or hopping. 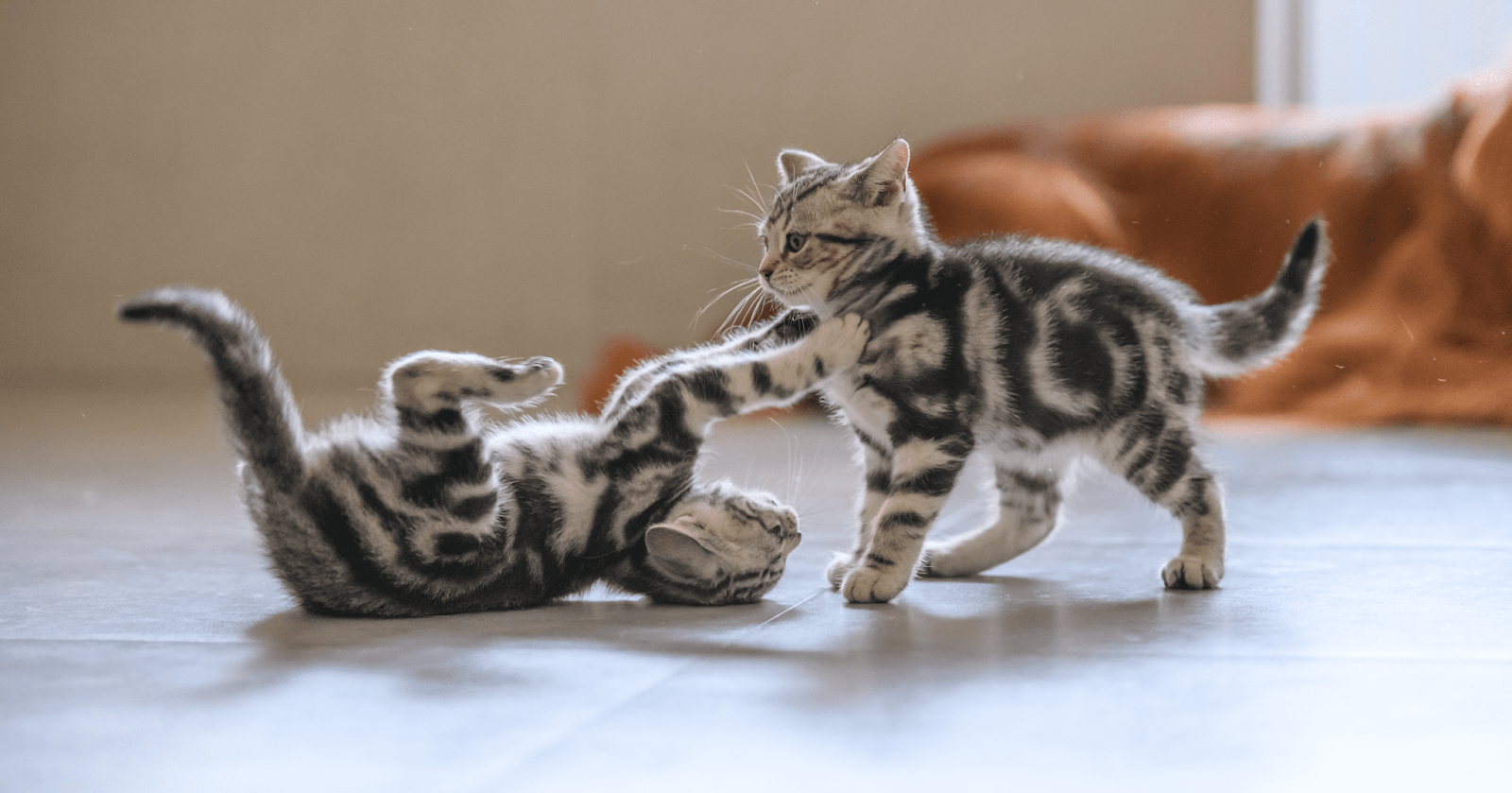 A common problem with distinguishing playing from fighting is that it can change from one to the other momentarily. Either one or both cats can suddenly feel they’ve had enough and things can quickly turn. One may begin to hiss, claws may come out and they may consistently run away rather than returning to the game. This can make it more complicated when judging if cats are friends or not, and their behavior during play is not always an accurate reflection of their overall relationship.

To help, the cats’ behavior at other times can be considered too.

Look for positive social behaviors, such as meeting with their tails up, cuddling up together, mutual grooming and face or body rubbing. Sharing food bowls is not necessarily a sign of a positive relationship, nor is sleeping apart on the same bed or sofa.

It is not such a good sign if they display negative behavior towards each other, such as blocking access to rooms or resources, hissing or swiping as they pass by, or watching them intently as they try to go about their normal activities.

Encouraging cats to play together can be  very difficult, but there are a number of things you can do to help. 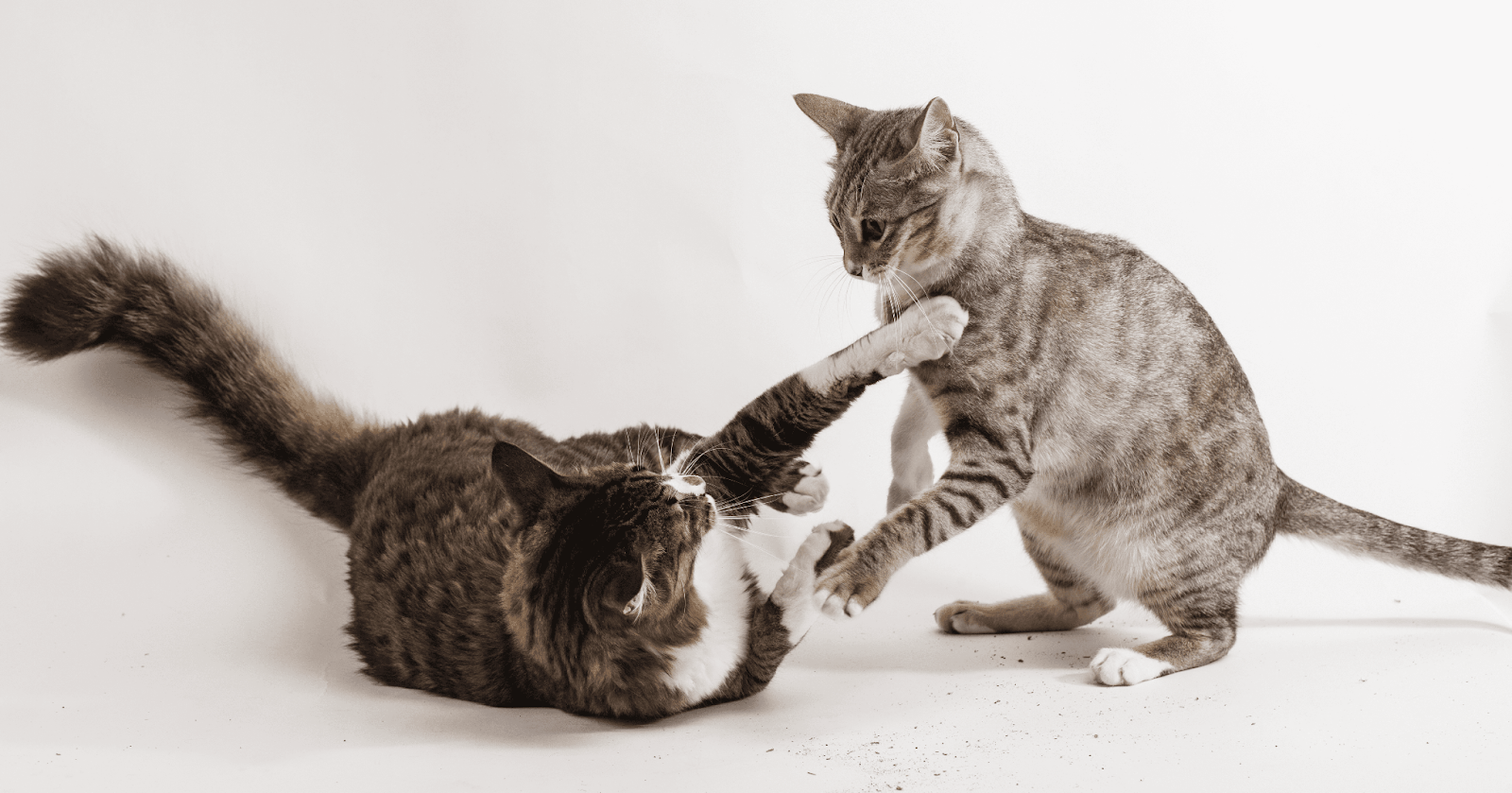 Set them up for success with matching pairs

Before bringing two cats together, give careful consideration to their expected activity levels and play drive. Pairing an energetic kitten with an elderly cat may potentially bring problems  and the kitten’s attempts to play may be met with a hostile response.

Taking the time to match activity levels and temperaments can really pay off when looking for a pair that develops a strong, positive relationship. Two kittens from the same litter usually work best as they are perfectly matched in terms of age and there is no risk of rushing the introduction process. 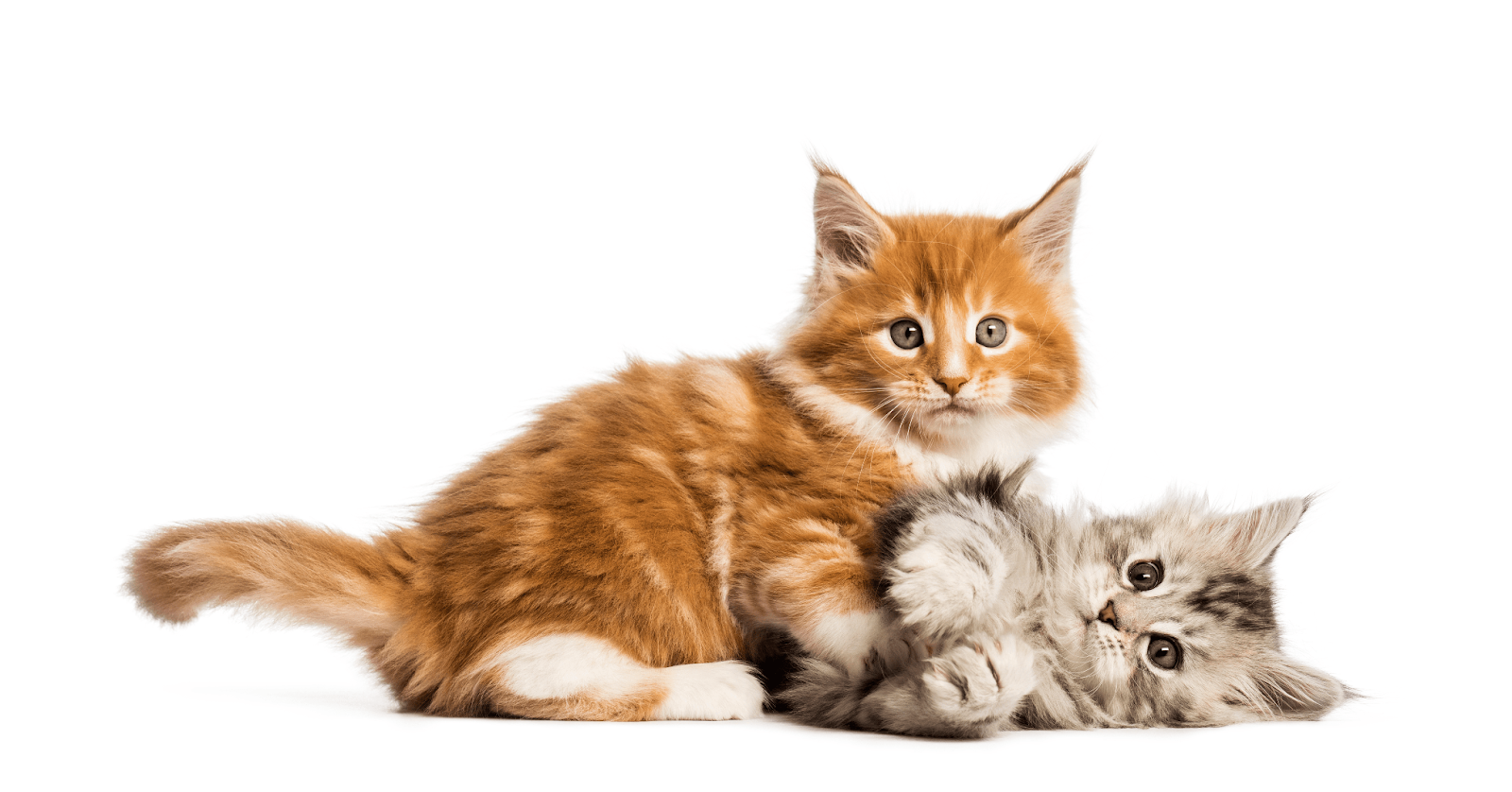 Reduce tension at other times

Steps to avoid negative interactions at other times of the day can be taken to prevent their relationship deteriorating. Cats that engage in aggressive interactions will be less open to friendly play as they may expect it to turn sour.

The most important consideration to make here is to reduce any potential competition between them in the household. Doubling up on their resources (food and water bowls, litter trays, beds, scratch posts, etc.) and placing them near their favorite places can help them share the territory without competing for these. 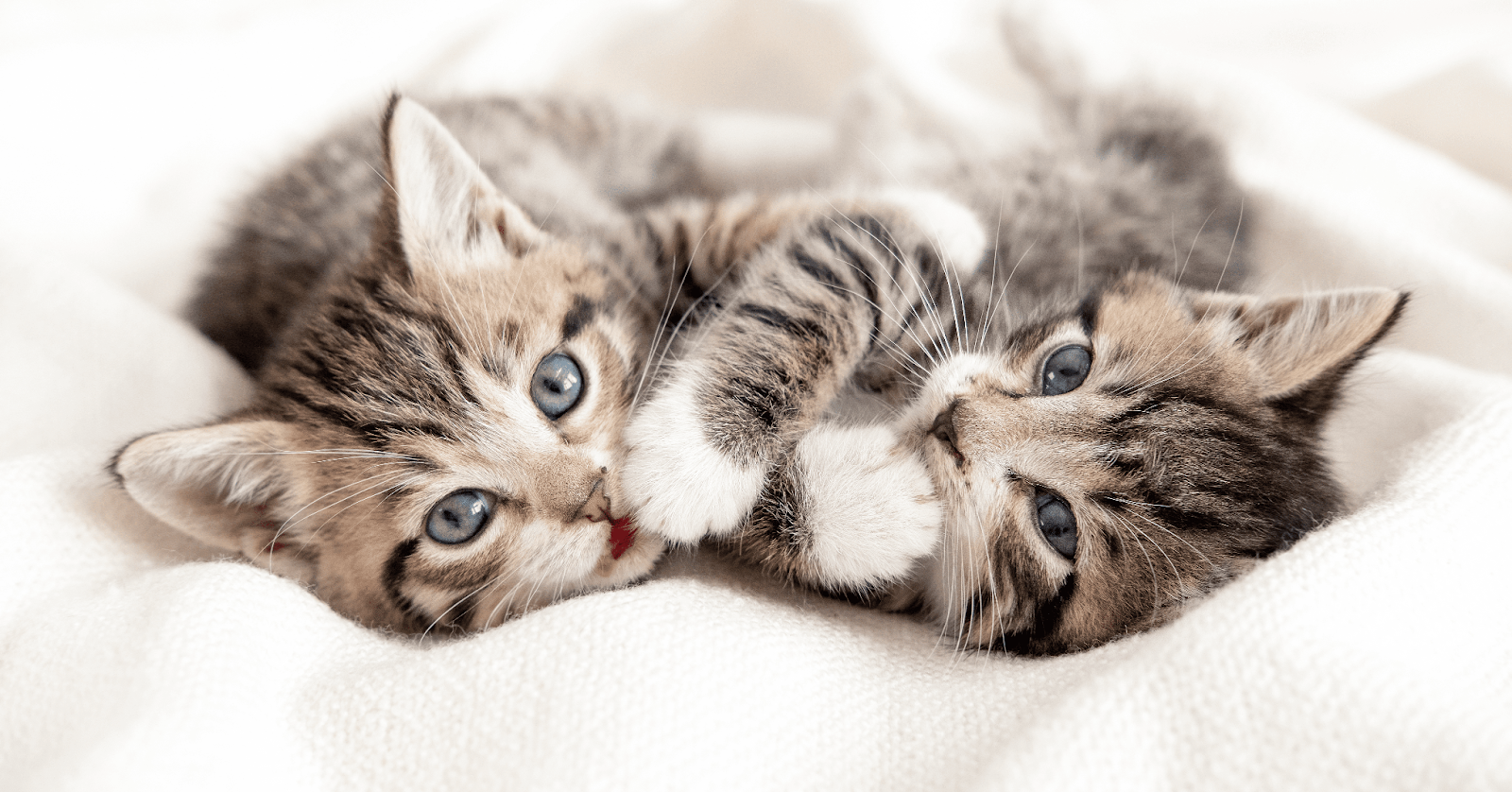 Redirect if there is a mismatch

With one super playful cat and one with less enthusiasm, spend time playing with the more enthusiastic cat yourself to help channel some of their energy away from the other cat. This should relieve some of the pressure on a cat who is constantly the target of unwanted stalking, pouncing and grabbing.

For owners that work long hours or spend a lot of time out of the house, knowing their cat has a friendly play mate to spend the day with is a big reassurance. Taking time to set them up for success from the start can help them develop a strong relationship, enriching the lives of both the cats and the owners.